We resumed with the PCs still in the Duergar fortress Narborg, in some kind of training gym featuring a swimming pool and rails high above a spiked pit, having just defeated some duergar and a stone golem.  Everyone rested a bit.  Elias asked Garreth to read a Bless scroll on him.  Seépravir heard a crashing sound far to the west.

Zaber scouted around, listening to doors and looking for traps.  Eventually, he found a room with dried blood on the floor and a large statue of a duergar with stone wings and tentacles for a beard, which Elias identified as the duergar god Sodoutym, the Dark Foe, Hellbeard, god of assassins.  Elias noticed that the room had low Sanctity for him, and said they should wreck the statue.

But just then, invisible Wolfrik wandered south, and bumped into an enlarged, invisible duergar guard.  Then into (also invisible) Zaber, while trying to run away.  Zaber flew back north to alert the others, and Polly (fortunately with See Invisible) flew south to handle the problem.  She saw the invisible duergar running south, put three arrows in his brain, and knocked him out.  Seépravir cast Entomb on the knocked-out duergar, though he was in bad shape and might not survive for long after being revived.

While the group was standing around, Polly got a glimpse of another duergar to the south.  She fired arrows, but failed to hit, and then the target disappeared out of sight.  Everyone warily prepared for a fight, but no duergar emerged.  Zaber heard the clink of armor somewhere to the southwest, and snuck south to take a peek.  He saw several enlarged, invisible duergar, lined up preparing to charge.  And charge they did.

A wild fight began, with a clump of about seven duergar guards with maces charging, while two more with crossbows tried sniping from behind.  Polly tried shooting one, but missed.  Garreth injured one badly with his katana.  A duergar tried to Slam Elias, but he dodged, then tried to get back-to-back with Garreth so they could defend each other.  Polly knocked one out with an eye shot, then Garreth knocked one out with a neck chop.  Elias tried flailing a duergar twice, but he stopped both blows, using up his block and best parry.


Both Elias and Garreth defended well enough to make duergar lose control of their weapons.  Meanwhile, Zaber pickpocketed a crossbow bolt, not wanting to attack and lose invisibility.  Polly flew behind some duergar to avoid their shields, and shot two of them in the back of the skull for  knockouts, while Seépravir yelled tactical advice.

The two crossbow duergar in the back, having aimed for a while, both tried shooting Garreth in the eye.  He managed to dodge both.  Zaber threw the pickpocketed crossbow bolt and distracted one of the duergar, while Polly snuck nearby and shot both of them.  That left only two duergar left, who went down to Garreth's katana and Elias's flail.

That was the last resistance the party found on this part of the level.  Garreth announced that he'd like to gather up all the loot (most of which was duergar weapons and armor), so the group started dragging all the bodies to the firing deck to the south.  There Garreth decided to widen an arrow slit on the east side of the firing deck, to make a new exit.  It took quite a bit of bashing with a pick to eventually widen the slit from 6 inches wide to 3 feet wide.

After all the nearby bodies were dragged into position for looting, the group went back to the main north-south hallway, and Garreth destroyed all six portcullises with Power Blows.  Then they went back to the chapel and Garreth destroyed the large statue, while Elias spread some holy water and cleaned up the bloodstains, trying to undo the room's evil aura.  Then they went back through some rooms that they hadn't really searched before, and opened random foot lockers, collecting minor treaures.  Meanwhile, Zaber scouted around, finding a couple of secret exits from the fortress back toward the causeway, and a couple of doors that hadn't been opened yet.

When everyone else was done dragging bodies around, Zaber asked them to stand guard while he opened a door.  Behind it was a fancy bedroom, with a feather bed and a mirror and a desk and another statue of the guy with the tentacle beard. The desk contained some records of a mercenary unit, the Halved Helm.  Behind the desk was a secret spy-hole into an adjacent room, though it was blocked by a cabinet on the other side.

Zaber went back out to the second door, opened it, and found a room with four beds and some chests.  It had another door, to some kind of clubhouse, with dead animal heads on the walls (making Polly unhappy) and a cabinet containing several barrels of beer and one of brandy.   Zaber wanted to open them up and start drinking, but Garreth talked him into waiting until later.

Finally, Zaber doubled back to search the chests.  Two contained nothing of great value, just clothes and a letter of commendation from the Thane and a string of Drow ears.  The third was trapped.  He managed to disarm the trap, but then the chest was empty.

Seépravir cast Seek Magic to see if they missed any magic items.  The first casting revealed that the walls of the fortress were enchanted.  The second casting, ignoring the walls, showed no magic nearby, with the nearest unknown magic pretty far northwest.

We stopped there, having spent a great deal of time moving around the mostly cleared map, looting chests and breaking things.  The players discussed whether to go back to Cillamar, but decided to stay in Narborg for now, to avoid giving the duergar a chance to reinforce.

Only one fight this session, versus an ambush by the surviving diehard Duergar guards that had been bypassed before.  Most of the PCs having See Invisible meant it wasn't a very successful ambush. 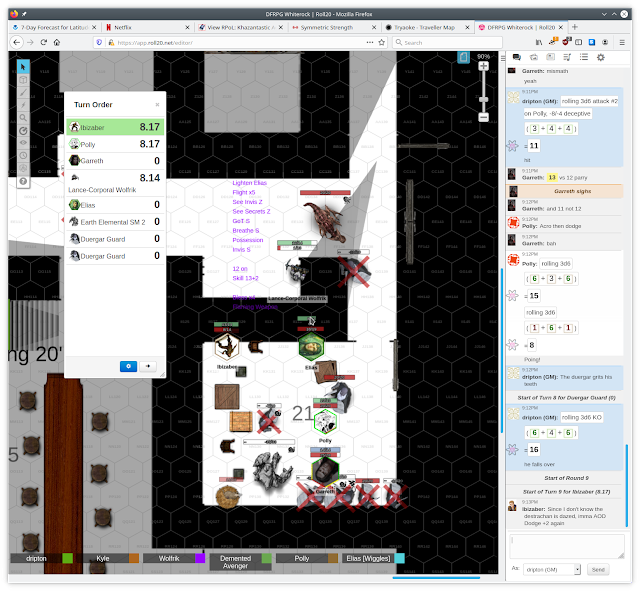